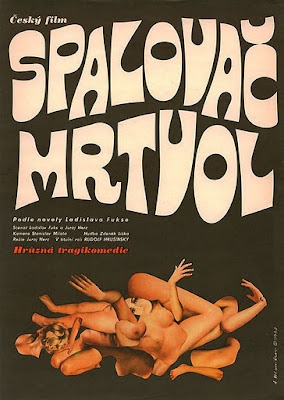 Juraj Herz’s The Cremator is exactly the kind of film I had in mind when started this site: it’s highly unusual, not particularly well known, and most importantly it’s very good indeed. Made in 1968, it is a product of a creatively healthy time for Czech cinema, and its assured combination of dark comedy and psychological fantasy-horror makes for a memorable and creepy viewing experience. The eponymous cremator is Karel Kopfrkingl (Rudolf Hrusínský), a man who cannot be distracted for long from his favourite conversational topic: death. To say he is proud of his job would be a massive understatement; he repeatedly expounds upon the spiritual significance of burning the recently dead of his native city, Prague. He holds close to his heart some Buddhist principles that may be quite fatally mangled, believing that cremation is the best way to return each man’s essence to the earth and be reincarnated, and (with more alarming implications) that death is the only real release from suffering. This can all be deigned from the eerily calm orations that make up at least 80% of all the film’s speech, and Herz visually matches this spoken dominance by keeping the audience’s view ruthlessly subjective – we follow only Kopfrkingl throughout, for better or worse, and at certain moments of heightened tension the camera entirely adopts his perspective. The tricks Herz uses to do this give The Cremator its expressionistic visual style and most significantly its editing style, which I’ll get to after I try to synopsise without dropping any big spoilers. 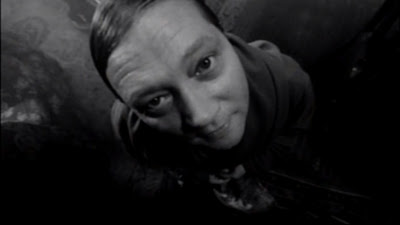 It’s not immediately apparent that the film is set sometime in the 1930s, but a visit by Kopfrkingl’s friend Mr Reinke sets the audience straight – he is eagerly awaiting the arrival of the Nazis and the inevitable occupation of Czechoslovakia. Reinke plants a seed of doubt in Kopfrkingl’s mind concerning the ‘purity’ of his own blood, which leads him to ask his Jewish doctor Bettelheim about its nature – can it be ‘pure’ or ‘mixed’, or even perhaps ‘tainted’? “There’s no difference in blood.” He replies. “It’s like ashes. You say yourself that all human ashes are the same, be they French or Spanish, doctor or clerk.” But the old doctor’s words go unheeded as Kopfrkingl slips further into collaboration with Reinke and his Nazi sympathisers, acting as a spy and informant against even those closest to him. 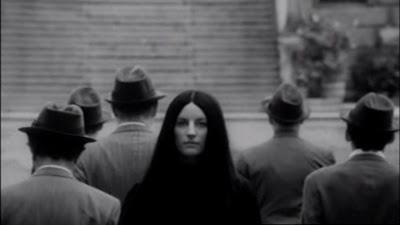 The narrative arc is essentially the familiar one of the man misled past the point of no return, not dissimilar to my #1 entry The Conformist in fact, and a necessary dynamic in these stories is for the audience to want the character to resist capitulation, to reassert himself and come to realise what he is doing is wrong. As The Cremator adopts a dread-laden and claustrophobic vibe from its very start, it’s quite clear that Kopfrkingl will not come to that realisation. The issue then becomes how far he will go. There is a definite sense of inconsistency between Kopfrkingl’s Buddhist misreadings and the bullish Fascism of his friends. Sure, he’s incurably morbid and joyless, but does he have it in him to be a tool for a murderous state? 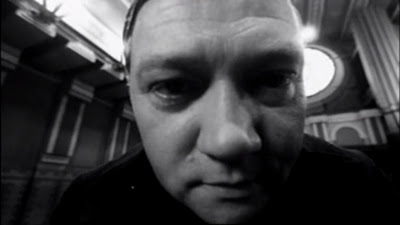 The extent to which he is just flat-out deranged is difficult to assess because, despite the overt references to Nazism and date-specific setting, the film plays out more as a fantasy than anything else. Realism has no grip on this story, which allows Herz and his editor the space to bring in techniques that really disorient the viewer – frequent cuts between extreme close-ups and medium shots make it difficult to discern when there is a change of scene and location, which has a kind of montage effect. In fact, it’s like Kopfrkingl’s life is lived entirely in montage and fluid cross-cutting. The scene changes often intersect in unusual and temporally impossible ways, as when Kopfrkingl is simultaneously witnessing a Jewish religious celebration and recounting it to Reinke: the latter wasn’t there, but his mouth enters the shot and asks probing questions right into Kopfrkingl’s ear as he watches. There is at least one example of a character reacting to the sound of something from the following scene – in fact, the sound cues the quick transition. If you like little touches like that, you’ll be regularly raising your eyebrows at The Cremator. 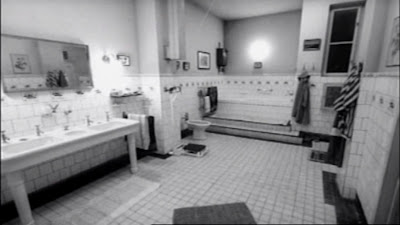 The horror element comes from Herz’s use of wide-angle lenses to emphasise subjectivity and the space of the interiors, and this can be really unnerving when combined with the fast editing and the impressive sets. The cremator’s imposingly large tiled bathroom becomes the scene of a particularly nasty act, and you can’t really go far wrong with an underground white room full of coffins, can you? The supporting characters add to the sense of unreality – everywhere he goes, Kopfrkingl sees a man bickering with his too-sensitive wife, an adolescent boy comically over-fascinated by his laconic girlfriend, and a silent dark-haired woman carrying flowers. Some of these people add comedic elements, but their behaviour seems completely locked into repetition. They’re like the anonymous aristocratic guests at Resnais’s mansion in Last Year at Marienbad – their intention may well be as satirical avatars or stand-ins, but their raw effect onscreen is first and foremost disconcerting. 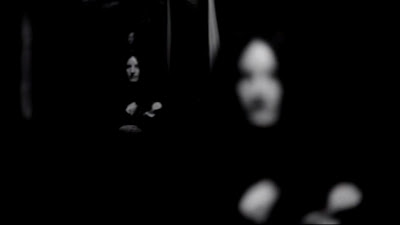 There is a scene where Kopfrkingl and Reinke speak to each other about laying off the crematorium staff from different rooms in a brothel, and Herz plays masterfully with the set’s door frames and mirrors. Here is the clip: [I can’t seem to correct the aspect ratio, sorry!]

There are some very odd framing decisions too, partly in conjunction with the aforementioned wide-angle lens shots, and I can only guess that these eccentricities are there to create a visually unsettling relationship between the characters’ bodies and faces and the (frequently unusual) spaces they inhabit. For instance, during a late scene where the extent of Karel Kopfrkingl’s Nazi collaboration is shockingly revealed, Herz places Hrusínský in front of a huge hellish Boschian fresco, framing several shots to include the most of its detail and editing the sequence together into a dizzying montage that confirms the audience’s deeply felt dread and apprehension as to how pitch-black the movie is prepared to go. I won’t spoil it here, but remember while you watch that Juraj Herz is one of only two filmmakers to have survived Auschwitz. Knowing this, the denouement and final shot of The Cremator could make this film one of the most audacious works of fiction ever created by a Holocaust survivor on the subject. 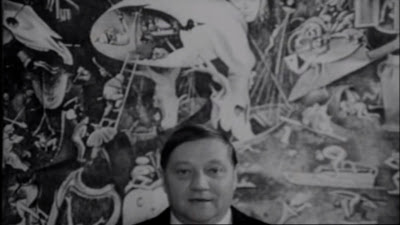 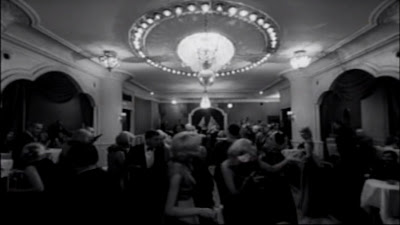 If this all sounds a bit too rich in formal self-consciousness, then let me reassure you that every fancy technique is employed with great skill, and with enough regularity to elevate them from little visual tricks to the constituent parts of a proper bona fide cinematic voice. In other words: it’s consistently odd, but it’s just how the movie speaks. There’s so much more to say about it, but I will refrain from deep analysis: The Cremator is a nightmarishly strong statement about the potential for man to be swayed by mysticism and dogmas, as well as by flat-out coercion, and may well be one of the most distinctive movies ever to emerge from behind the Iron Curtain. 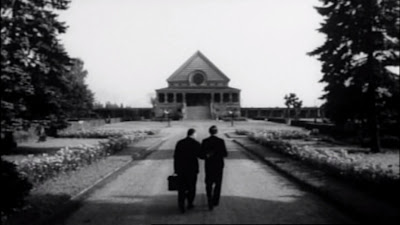